Information regarding all recent activities. 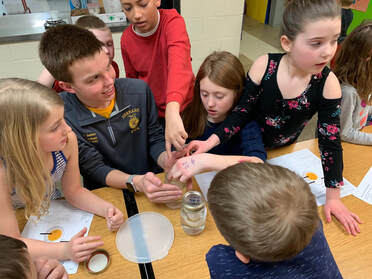 Each month, several Denmark FFA members go to the ECC to teach students in the Before and After School Care Program more about where their food comes from, how it is made, and about other agricultural commodities. For the 2019-2020 school year, FFA members have held two events already, in September, October, November, and December. The age group switches every month between the first through fifth grade students and the 4K/5K students. In September, the topic was honey and honey bees, students watched a video about honey bees and were able to try both raw and processed honey. Did you know pumpkins aren’t just for Halloween? The first through fifth grade students learned this in October as they measured and weighed pumpkins, learned the main parts of a pumpkin, learned what products were whole or processed, and they even got to make pumpkin pie in a bag! In November, 4K and 5K students learned about the responsibilities of a farmer and agriculturists. Denmark’s newest scientists were formed from December’s After School Ag as students in grades one through five learned about food science and went through a few experiments. 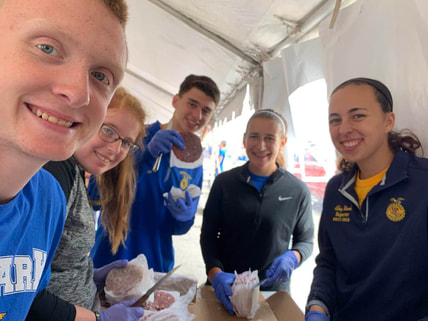 ​     From July 17th-19th, the Officers got to kick off the start of the FFA year by going on the annual FFA Officer Retreat in Mountain, Wisconsin. The Officers were able to bond with team building activities, swimming, and lots of campfire talks, while also planning the events for the upcoming school year. The officers had a great time, and they are excited to meet all the new members this year, and show them all of the fun events we have planned!

​      FFA members Mark Wanek, Hannah Nelson, and Owen Petrich had the opportunity to travel to Washington DC for one of the top leadership conferences available to FFA members, the Washington Leadership Conference. While there, members were able to grow in their leadership abilities while touring the historic capital of our country. Mark, Hannah, and Owen were also able to learn about key leadership skills such as finding their passion, the importance of diversity, and how to advocate, while creating a Living to Serve Plan that they can bring back to their chapter and community. WLC is one of the most prestigious leadership conferences available to FFA members.

​      On June 23rd and July 28th, the Denmark FFA walked
the parade route of the Maribel and Denmark Parades, and handed out string cheese to the parade-goers. The people watching the parade were able to enjoy Wisconsin's top agricultural commodity, cheese, while standing in the heat. The members loved giving back the the Denmark and
​Maribel communities who support our chapter very much.

February 4th was a successful night for the Denmark FFA as it was one that showed the hard work and dedication of many FFA members. In the weeks leading up to the district competition, there are many late nights and early mornings that members spend preparing. This year, Denmark has a total of ten high school members and ten middle school members who competed at Brillion. All middle school members competed in quiz bowl and both teams from Denmark will be advancing onto sectionals. The 7th grade team placed first with the 8th grade team finishing close behind in second place. Sydney Rabas and Mark Wanek competed in Creed Speaking, where Mark Wanek took first. Lexy Nowak competed in Discussion Meet and placed third. Katrina Hoesly placed first in Employment Skills and Joe Schlies placed second. Placing in Prepared Public Speaking were Joe Schlies, first, and Emily Nelson in second place. Katrina Hoesly and Lashawna Vogel competed in Extemporaneous Public Speaking, in which Vogel placed second in this event. Another event in which Denmark excelled in is Parliamentary Procedure, where Denmark's team placed first.The top two competitors or teams in each event move onto sectionals, which will be hosted by Denmark at the end of March.

On a Friday in February, members of the high school FFA visited the elementary school to educate third grade students about common foods grown and produced in Wisconsin. With the help of resources from Wisconsin Ag in the Classroom, unique activities were created to teach each class about the diverse agriculture products found in Wisconsin. After this event, the third grade students possessed a greater understanding of where their food comes from and Wisconsin’s large agricultural role throughout the world. The different activities focused on teaching about Wisconsin’s top products, such as corn, milk, cheese, and cranberries.
The third grade students actively participated, and asked a variety of questions throughout each activity. At each station, the students added different ingredients containing important crops from our state to create trail mix, and, at the end of the event, the students had created a personal bag of trail mix to eat!
DENMARK FFA